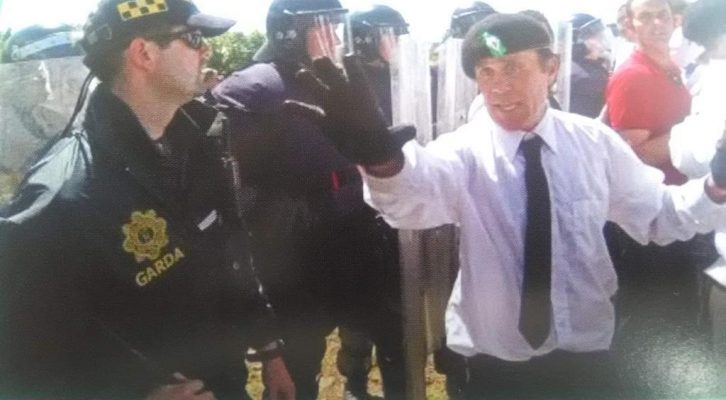 We are reproducing the interview with Diarmuid Mac Dubhghlais of Republican Sinn Fein originally published in Serbo-Croatian language on Princip.Info. Enjoy!

The audience in Balkans is not familiar with details of Irish politics beyond what mainstream media serves them, which in reality means that little to no news from Ireland reach us. Could you briefly introduce Republican Sinn Fein and tell us how is it different from other organisations that split from the original Sinn Fein that claim historical continuity?

While it is generally accepted that Republican Sinn Féin (RSF) split from Provisional Sinn Féin (PSF), this is not quite true. In 1986 the annual conference discussed the acceptance of one of the two partitionist assemblies (governments) in Ireland that owed their existence to British laws. The majority voted in favour of acceptance, leading to a number of members leaving. Technically those who walked out retained the existing constitution and thus are the continuation of the Sin Féin formed in 1905. It was a mistake to adopt a different name but such is history.

A question from history: relation to the issue of Michael Collins, what is the correct road for RSF, a treaty with the British or not?

Short answer- NOT. Britain has no place in Ireland, they have tried every tactic in our land except one; – WITHDRAWAL. While the war/peace levels have ebbed and flowed over the generations one has remained, there will always be some resistance to the occupation of our land. M Collins used the analogy of his deal being “a stepping-stone” to unity. 100 years on and 3 more splits from the attitude of driving out the occupation all these parties have watered down their attitude towards the British interference in Ireland, all have used that same “stepping-stone” line, yet we are no further down the line towards unity.

What are the political objectives of Republican Sinn Fein and what is its strategy to achieve them?

The obvious first objecting is to remove all British interference in Irish affairs and re-establish the Republic. Then we must work towards regaining our sovereignty, much of this has been ceded to the EU in treaty after treaty. The people of Ireland rejected both the Niece and Lisbon treaties but the establishment parties told the people they made wrong decisions and made them retake the vote, with the implication that we would re-do the voting until the correct decision is made.

RSF want a 4 province Federal Ireland, and have had policies promoting (see Éire Nua program ). This we feel is best suited Ireland where we have hugely differing requirements for different areas, ie West of Ireland ( Connaught )having a majority of small farmers, North of Ireland (9 county Ulster) having a high population of Protestants etc

We understand that bourgeois elections are far from being an objective measure of political strength, so we wanted to ask you how do you compare the strength of RSF in comparison to other political formations beyond the parliamentary representation?

RSF are not a huge group, but have a steady and dedicated membership, over the years members have left to become involved in other newer organisations, but it is fair to say that RSF have firm written policies that deal with many aspects of life in Ireland. While some of the newer parties are in my opinion more popular today, like those who initially split from PSF, their membership tends to dwindle after a relatively short time and they do not have policies other than a demand for unity, with no idea what form a United Ireland should take ie; – Federal, Neo-Liberal, Anti-Imperialist etc.

Ireland witnessed a surprising victory of Sinn Fein in Ireland. What is the relation of RSF with the (Provisional) Sinn Fein?

There is no great relationship between both, the split of ’86 is still fresh enough in the memories of many, Also the fact that PSF administer the Occupied Six Counties for Westminster means they are (to us), puppets at best and collaborators at worst. They project themselves as Republicans yet call for recognition of Westminster superiority in politics, call for recognition of colonial paramilitary police at a legitimate police in Occupied Ireland and call on the people to inform on those who still oppose the occupation by physical means.

The victory which surprised even Sinn Fein. Does it mean that the right-wing neoliberal policies pushed the people of Ireland to demand a more radical break with the unrestrained capitalist policies? Do you think Sinn Fein would be able to keep its promises?

While for many in the wider world a vote for more leftist policies and parties may seem of little consequences, for Ireland it was and is somewhat significant. For generation the control of church and neo liberal politicians has kept 2 parties in power for 100 years. This past election more younger people made conscious decision as to who they would vote, This was a direct result of the unrepresentative policies inflicted on the people for the past decade in particular, no social housing, underinvestment in schools and hospitals and an increase in retirement ages for older our generation while at the same time generous and early pensions for politicians, an ability for politicians and those of better means to access first class private health alongside being able to afford private housing or rent.

For generations people voted the way their parents did or not at all, so it is good to see a higher number of youth (20-35) get out and vote, the majority of whom voted for parties professing to be left. I feel IF PSF can form a coalition with other parties they will try bring in some progressive left policies. They have written legislation for returning the age of retirement down by 2 years, and everyone knows there has to be a program of house building. This feeling is however tempered by the knowledge that in Occupied Ireland they have stood over an increase in retirement age and an increase in some regressive taxes. Also for those who may know the administration in Occupied Ireland did not sit for almost 3 years, yet the PSF assembly members (along with all others) continues to draw their wages, which at best is not good socialist politics.

In case Sinn Fein does not manage to keep up with the promises, could a further radicalisation of the society be expected? For example, among the youth which seems to be carrying all the weight of the neolibral burden. Does it also mean that RSF could gain from that situation?

A good question and if it was asked 2 years ago I would have said NO. But the politicization of a huge swath of our youth will mean that things will change, whether at a slow pace or in a radical manner is really unknown. A mass movement in the past few years against water tax and a home tax surprised the establishment and PSF, on both these new taxes PSF were on the wrong side and had to do a complete turnaround. RSF are an abstentionist party, until such time as the Republic has been re-established, this does somewhat stifle our growth. Alongside this the oppression from the state, through their political police makes it hard to grow, but if the youth become more radical there is the chance of better growth but equally a growth in other left parties. Also an awareness that a United Ireland would be a more prosperous Ireland will dawn on the politically aware citizens and a growth in the calls for Unity and disengagement of British Imperialism.

When talking about Ireland, the media talks about the Republic of Ireland and Northern Ireland as two separate entities without mentioning the context of British colonisation. The language being a way to legitimise particular political contexts, what is for you the correct way to refer to those two entities?

As you will have seen from earlier answers the correct term for “northern Ireland” is Occupied Six Counties” or “Occupied Ireland”. If it is correct to call all lands of Zionist Israel Occupied Palestine then the same has to be true for the area occupied by the British.

For the area known at The Republic, we use the “Twenty-Six County State” or the “Freestate”. Historically the Republic was founded under arms is 1916 and consisted of all 32 counties, it was also confirmed with the only All-Ireland election of 1918. What was established in 1922 by M Collins was called The Freestate consisting of only 26 counties.

I have not heard of this particular survey, but any survey result depends on the complexity or simplicity of the question put and the demographic asked. What I do know is that over the past 2 years the results of such surveys have consistently resulted in a majority favouring. Unity/Independence. Many surveys have also done to gauge the impact unity would have on the finances of a United Ireland over the existing 2 states; again these consistently concluded that a United Ireland would be financially better off to the tune of Billions.

For the second part of your question, my belief is that all those within the UK will be financially worse off after Brexit is finalized, people in Occupied Ireland will obviously see a financial benefit of unity irrespective of their present allegiance.

In regards to Balkans, how does RSF evaluate the situation around the imperialist-imposed independence of Kosovo?

This is something I have only briefly looked at, I suppose the propaganda of my early adulthood had be believing the age-old tactic of Imperialists, that warring tribes within Yugoslavia could not work together and areas wanted independence etc. The arbitrary recognition of an independent Kosovo stands in stark contrast with that of Catalonia. It is clear that a politically weakened Serbia was the desire or USA, UK and others within the EU. To date it is still difficult to find hard facts from independent media outlets, I would be very interested in a full analysis of the situation from on-the-ground activists.

The fighting of the Rojava is well documented in all media here, which is strange in many ways, normally we see hear little of groups seeking a homeland considering our past/present. Traditionally Irish Republicans have called for a homeland for the Kurds, we have stood in solidarity with their political prisoners. Today, it is clear that the Rojava are again being used as a tool by Imperialists, the USA has established airbases in areas controlled by Rojava and at the same time facilitated Turkeys annexation of areas of Syria. It is clear this is a continuation of the proxy war against Syria and its people.

Finally, what is your favourite football club?

I can assume it is the football of Liverpool + Manchester United. This is SOCCER J and I have no interest in it. Over-payed soft men who fall and roll round crying if a strong wind from a challenge blows them. I recommend you look at; Hurling or Gaelic Football for a real man’s game 😉