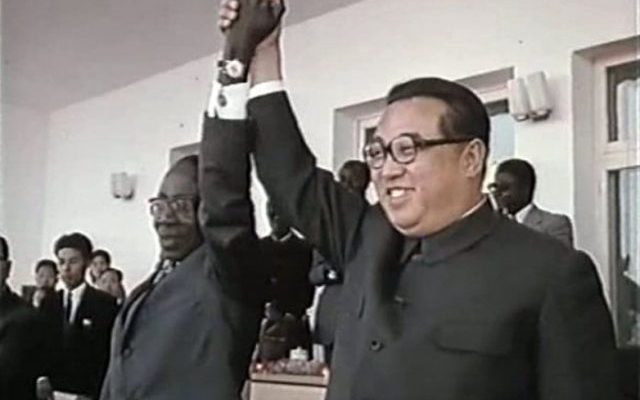 DPRK and Zimbabwe: A History of a Defiant Friendship

At the time of the struggle for national liberation of Zimbabwe during the 1970s, rival liberation movements – African Peoples Union (ZAPU) and African National Union of Zimbabwe (ZANU) – received military aid from socialist countries. ZAPU, which mainly focused on mobilizing the proletariat in the cities, was supported by the USSR. On the other hand, ZANU, whose membership was mainly comprised of peasants, received considerable support from China. However, the general secretary of ZANU, Robert Mugabe, rejected the Chinese political line on USSR as an “imperialist power”, and continued to ask Moscow for support, as well as other socialist sources.1

Moscow stubbornly denied to reconsider its support and accept ZANU as the legitimate leader of the independence movement, even when it became clear that ZANU guerillas dealt considerable damage to colonial forces, but accepted temporary coalitions between the two organizations within a unified Patriotic Front. ZANU managed to garner support from Yugoslavia (which previously also supported ZAPU), and as a result, Robert Mugabe was invited to the Ministry Conference of the Non-Aligned Movement in Belgrade in 1978.2

Even though he was a hardline Marxist, Mugabe sought support from many sources and avoided being dependent on any superpower. As a result, first contacts between Zimbabwe and the DPRK were established. President Kim Il Sung considered aid to the movements and socialist-oriented states in Africa his obligation, and Mugabe was impressed by the political autonomy of the DPRK within the socialist camp. In a report of British Ministry of Foreign Affairs it is outlined that Mugabe considered the North Koreans truly non-aligned, as the Yugoslavs. The report also has a statement that outlines that, although the analysts don’t agree completely with Mugabe’s assessment, they admit that they (North Koreans) are truly are their own masters.3

Starting in 1976, ZANU members were trained in the military camps within the DPRK where they were taught how to handle explosives.4  Rodong Sinmun, the paper of the Workers’ Party of Korea, voiced for the first time its support for the struggle of the people of Zimbabwe and called for the “destruction of the racist regime”. Afterwards, Mugabe visited Pyongyang for the first time in 1978, where he sought more military support, which was granted in full.5

At home, Patriotic Front rarely acted in a coordinated fashion. ZANU was stationed in Mozambique, from where it had planned and executed guerilla attacks on the army of, then, Rhodesia. On the other hand, military bases of ZAPU were in Zambia, where they were trained by Soviet military advisors. Even with technological advantage and an abundance of weaponry, ZAPU failed to mark greater success in praxis, because a conventional strategy and heavy armament weren’t effective in the rainforest. For example, the conventional military operation “Zero Hour” was cancelled after the Rhodesian Airforce dealt heavy losses to ZAPU.6 In a report from 1983, CIA admits that ZANU were the ones who were involved in the war, while ZAPU “sat through it in Zambia”.7

In time, the Patriotic Front forced the government of Ian Smith to compromise, which led to a series of meetings in Britain and the “Lancaster Agreement”. Mugabe proved to be a tough negotiator, while ZAPU leader Joshua Nkomo sought to present himself as a “moderate option”, thanks to which the Rhodesian white minority would retain many political and economic privileges. A peace agreement was signed and a new constitution was adopted. The Patriotic Bloc has pledged to protect the right to own land of white colonists, and that the redistribution of land will not be carried out by force, but by buyout on a “voluntary” basis. The first democratic elections were held in 1980: ZANU won 63% of the vote, or 57 of the 80 seats in parliament allocated to African parties, ZAPU won 20 seats, and the same number was reserved for the white minority.8 Real conflicts between the two rival movements were yet to follow.

After coming to power, Mugabe established diplomatic relations with socialist countries, including the USSR, which was trying to compensate for the previous lack of support for ZANU. However, Zimbabwe and the DPRK have started a special relationship. On his second visit to Pyongyang in 1980, Mugabe attended the Sixth Congress of the Workers’ Party of Korea as a guest of honor.9 Mugabe thanked Kim Il Sung and the people of Korea for their selfless help during the fight against colonialism, saying that “the Workers’ Party of Korea experienced the struggle of the people of Zimbabwe as its own.”10

During that visit, he got the impression that the model of the DPRK was an appropriate model for the development of Third World countries. At the Congress, Kim Il Sung presented Juche variant of socialism, as a way to achieve self-sustainability in the countries of the Global South. On his return to Harare, Mugabe opened the first Juche Study Center in Africa, at the University of Zimbabwe.11 South African journalist and historian R. W. Johnson claims that Juche philosophy was central to Mugabe’s politics even after Kim Il Sung’s death in 1994, and that the only book in the president’s office was “Juche! Kim Il Sung’s speeches and writings.”12

Mugabe was particularly impressed with DPRK’s land reform, which he emphasized at a press conference in 1980, saying: “After the withdrawal of the Japanese, the DPRK faced the need to redistribute the land. But it did much more than that. Despite a population of seventeen million and a territory that is more than 85% mountainous, it has produced a surplus of food on an arable land of 250 million hectares. Zimbabwe has a lot to learn from the DPRK.”13 The DPRK offered to buy surplus tobacco produced in Zimbabwe in an attempt to strengthen the economy of the new African state.14

At the same time, the ZANU Women’s League copied the Korean model of improving the social position of women. The Women’s League pamphlet states: “As a liberation movement with a socialist agenda, we are particularly interested in the role and position of women in socialist countries, so that we can compare and evaluate our progress or lack of progress.” Kim II Sung advocates the rejection of backward customs and habits from the old society, the intensification of women’s education and the raising of their political awareness and knowledge.”15

The two countries also signed a military agreement that caught everyone’s eye. Under the agreement, North Korea has pledged to supply Zimbabwe with weapons and ammunition worth $18 million, as well as a hundred military instructors and advisers, free of charge.16 The British and Americans asked Mugabe to refuse the offer, but Mugabe rejected such a possibility and emphasized the important support of the DPRK during the fight against colonialism, as well as the lasting friendship and the role of both countries in the Non-Aligned Movement.17 In a conversation with British diplomats, the Chinese ambassador in Harare explained that the Koreans do not consult Beijing on their policy and “keep their cards closed.”18

Armored vehicles, tanks and AK-47 rifles were brought from DPRK, as well as a hundred instructors in charge of training the famous Fifth Brigade, made up exclusively of ZANLA fighters (armed wing of ZANU). Subsequently, these instructors and the Fifth Brigade trained and supported Mozambican units in the fight against the invasion of the South African racist regime and the guerrillas they formed in Mozambique (RENAMO).19 At the same time, terrorist attacks by the South African regime in Zimbabwe were on the rise. After the bombing of rebel groups loyal to the former regime and South Africans on the military base “Thornhill”, doubts about the role of ZAPU were born.

ZANU had the opportunity to rule independently, but Mugabe insisted on the division of power and the gradual unification of the two movements into one party. The leader of ZAPU, then Minister of Police, did not accept the proposal to unite ZAPU and ZANU, and still kept under control about 12,000 armed members of ZAPU. Tensions between the two groups intensified when a larger quantity of weapons and money was found in the companies owned by ZAPU, after which Nkomo was accused of planning a coup. According to the CIA, Mugabe no longer had to worry about Soviet support for ZAPU, because Moscow perceived them as “a spent force”.20

Mugabe then expelled Nkomo from the cabinet, which resulted in an armed conflict that ended only in 1987, with the complete defeat of ZAPU. The Fifth Brigade was the most deserving for suppressing the ZAPU uprising, which carried out the brutal military action “Gukurahundi” (“early rain that washes the chaff from the last harvest, before the spring rains”) in the province of Matabele.21 During this action, in 1985, Mugabe was hosted for the third time in Pyongyang, where he expressed gratitude at a press conference for continued military and political support and named the DPRK “the champion and leader of the struggle for economic independence and South-South cooperation.”22 Two years later, Mugabe goes on his fourth visit to Pyongyang, where he again expresses gratitude for all kinds of help and promises eternal friendship. That promise he intended to keep.

The Korean construction company “Mansudae Overseas Studios” won contracts for projects in Zimbabwe without competition. Without giving it the least of a thought, Mugabe rejected the offer of East Germany for the construction of a modern intelligence agency in Zimbabwe and on his own initiative called on the DPRK to take on that task. The DPRK accepted the offer and sent staff to Harare to set up Zimbabwe’s security and intelligence agencies.23 Many countries in the Global South were forced to sever ties with the DPRK during the 1990s, due to pressure from the West. Mugabe, of course, ignored those pressures and further development of economic relations between the two countries continued. Zimbabwe is even introducing a model of mass games from the DPRK into its official education system.

When uranium deposits were discovered in Zimbabwe in the 1990s, following the example of the DPRK and Iran, Mugabe announced the development of a nuclear program and the transformation of Zimbabwe into Africa’s first nuclear power. In practice, however, this was not easily feasible, as Zimbabwe did not own a nuclear power plant. At that time, there was an intention to procure the reactor from Argentina, but that plan mysteriously withered away.24 Finally, uranium exploitation began in 2005, and the question arises as to whether the DPRK has been given access to these deposits. The DPRK conducted their first nuclear test a year later.25

However, in 2009, Zimbabwe officially gave the DPRK access to uranium deposits under the “Weapons for Uranium” agreement, and on that occasion received a DPRK delegation in Harare. The agreement was a defiant violation of the sanctions to which both countries were subjected. To the criticism of the Western media, a senior ZANU official responded: “The DPRK has been our ally since the day of the liberation struggle against the rule of the white minority, so we do not understand why the media are now behaving as if this agreement is a revelation.”26 UN launched an investigation against Zimbabwe and Namibia for violating sanctions against trade with the DPRK in 2016.27