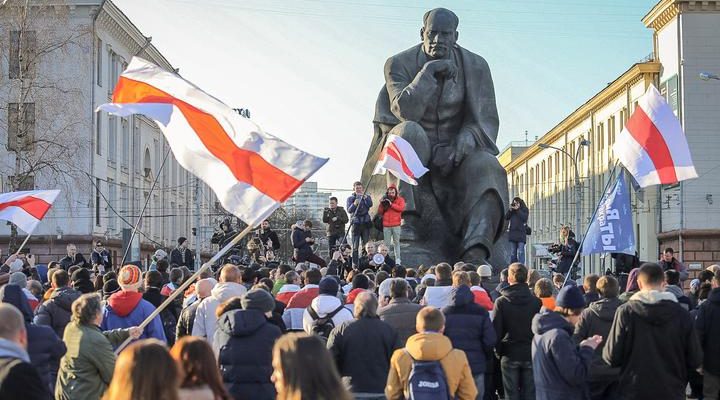 History as a guideline for Belarus protests

Riots are raging in Belarus after Lukashenko’s victory in last week’s election, and their promoters are well-known democracy and human rights advocates such as US Secretary of State Mike Pompeo and high-ranking EU representatives, among many other champions of freedom and liberties. While we do not want to touch upon the geopolitical intrigues involved in the protest and beyond, we want to use the past experience of the similar protests to demonstrate the development of the neoliberal future of Belarus, in case the protests succeed.

It would be unfair to believe that the participation of the working masses in the protest is completely related to conspiracies and the meddling of external forces. While foreign powers’ intelligence services might be powerful, they certainly are not capable of organising large scale protests without any cause.

It is clear that their support is far from the legitimate demands of the citizens that could contribute to the improvement of the standard of living. How is that so clear? Let’s look at the history of colored revolutions since Otpor! to this day: let us find an example when a successful coup brought successful economic development. When we say “successful”, we mean that it was successful for the toiling masses of citizens… you know, “the masses”, not “the handful” of 1%. We can wait, until one such example appears.

Why is it like that? If we look at color revolutions through the perspective of the theory of Global Capitalism school of thought (William Robinson, Leslie Skler, Jerry Harris, Jeb Sprague and others) we see the situation in black and white: the goal of the coup is to integrate these countries in the world capitalist economy according to neoliberal principles. More precisely, it supposes the transformation of the economy so that it functions according to the rules of the so-called “free market” (a market that is free for the flow of capital and investment, and all but free for the workers, including with the monopoly over the local market of powerful countries protected like engagered species of animals) under the management of world institutions that have authority over nation states-International Monetary Fund, World Bank, World Trade Organization, etc .. This also implies the reform of state administration, judiciary and other bodies so that the above-mentioned economic regulation is guaranteed, primarily in terms of foreign ownership, intellectual property rights, patents, etc.

How does it work in practice? After the coup, a “technocratic” administration is being installed, which will be implemented by the head of the IMF according to a neoliberal recipe. What are the ingredients of a neoliberal recipe? The IMF calls its prescriptions a Structural Adjustment Program (SAP) and the main spice is the reduction of government spending along with privatization and deregulation of the market. In other words, they give you money but only under certain conditions … It may sound familiar:

This policy creates a spiral of poverty and misery. Privatization leads to an increase in unemployment, and thus increases competition among workers, which is reflected as pressure on wages to decrease (or at best, not to increase). Abolition of workers’ rights, or deregulation of the labor market, is a process known as “informalization.” The reduction of workers’ rights also reduces the costs of employers to the detriment of workers, which in practice reduces the real wage, and increases the possibility of dismissal as well as reduced compensation for it. Informalization also refers to additional phenomena: increase in temporary employment, the number of short-term contracts (it can be hourly contracts, for example) as well as the so-called self-employed workers (eg the company hires you as a legal entity, not a private one, and then you bear all the costs of your employment: tools, equipment, insurance, means of transport, fuel, vacation, sick leave, etc.). Neoliberal logic presents these phenomena as job growth, although it does not contribute to the quality of life in any way. If you have a job for 100 full-time workers, and you employ 200 part-time workers, whom bear the cost of employment, then you have 200 workers who receive less than half the salary for the given job, while the entrepreneur reduces costs. Here we come to another effect of informalization, and that is the neglect of existing regulations and work in the gray, if not in the submerged economy. In order for workers or the company to save on costs, they ignore safety regulations, avoid paying taxes and social security.

The effect of informalization is obviously a decline in the absolute and real wages of workers as well as an increase in the profits of entrepreneurs. However, in such a situation, the state revenue in the form of taxes is significantly reduced. Firstly, due to the increase in informalization, and secondly, because the IMF policy usually includes incentive measures for investment that reduces taxes, and necessarily includes the abolition of protectionist measures of the state in the form of reduction of customs duties and tariffs. In that way, the domestic economy is left at the mercy of the world market, where it is not competitive, and that leads to its further destruction and a new cycle of privatization, bankruptcy, unemployment and the process described above. An empty state coffers also means the abolition of social protection systems such as the pension fund, health care and wealth redistribution systems. Thus the poorer will be even poorer, there will be more and more of them, while the rich will become even richer.

If we interpret this situation through the analysis of the world-system, we can see the following trends:

Now that we have a slight idea of ​​the framework in which globalization is taking place, let us turn to the main topic: Belarus. If the official information of Belarus is to be believed, then 50% of workers work in state-owned companies, 48.4% in private ones, and 1.6% in foreign ones. In addition, the Belarusian market, and especially the labor market, is very regulated – the state takes care of providing a standard of living, redistribution of wealth and subsidies. At the same time, as per UNECE, the domestic economy is protected by a series of trade barriers.

Is this an assumption based only on historical examples and the support of globalist forces to the protesters? No. It is an assumption that relies on these examples and support, and is based on the program of the presidential candidate of the opposition, where it is openly requested:

Can see a patttern here? Do you still have doubts about where Belarus will go with the victory of the opposition? If you stand on the side of the citizens today when the demands for a better life are used in favor of globalization, ask yourself what you will see in the mirror tomorrow when, completely expected, the mass of workers hit the bottom and realizes that there is another basement below.

Mechanisms of neoliberal aggression and its impacts on Belarus - AIF

[…] Serbian comrades have developed an analysis of mechanisms of neoliberal aggression which expresses the primary contradiction we are talking about, and they apply it on the case of Belarus to predict the possible outcome of a neoliberal transformation in the case the opposition wins. Using historical experience from previous colour revolutions, global capitalism theory and world-systems analysis, they develop a guideline for acting and strategy in this and future intents of the globalising capitalism to overcome its structural limitations and prevent its colapse. […]