Here we’ll talk about the attitude towards police violence. Since many of you are wandering in search of a position to adopt, we are here to help from Marxist perspective, which treats the world economy as singular, with its sectors (center, semi-periphery, periphery) just performing different functions.

Accordingly, at the start, we reject the First-Worldist approach that tends to universalize every issue, and so ideas like those that “all cops are bastards” (ACAB) and sadists or, contrary to them, that the police are “working class”, have no political significance for us.

The police is a repressive apparatus of the state (which is an institutionalized form of class and identity relations), so it is clear that it cannot be viewed in isolation from it. It follows that the attitude towards a given state also determines the attitude towards its police.

Therefore, position of the state in the world-system also shapes the primary function of its police. The higher the state is positioned in the hierarchy of the world capitalist economy, the more it is able to invest in its own society and thereby ensure social peace, so police repression is less pronounced (in some of them the police are not even armed). Such an internal organization is more often defended from the outside, so the role of repression is taken over by the army (or military alliances), which, by engaging abroad, ensures an unhindered flow of profits to the states of the center (you’ve all heard of the name “world policemen”); and by the border police that seek to prevent labor mobility.

Those states of the center with a relatively high rate of immigration deviate from this pattern; and so do those built on settler colonialism (e.g. USA, Israel, Australia, South Africa, etc.) where the repressive apparatus was in the service of maintaining the colonial order, and where the internally colonized were subsequently integrated into society as the most oppressed class (with the exception of Canada, in which case the natives are reduced to a statistical error).

On the other hand, the lower the country is positioned in the world-system hierarchy, the more pronounced the police brutality. In the peripheral states, the comprador bourgeoisie perform management and supervisory functions in the process of exploitation of their own lands and the transfer of value to the states of the center. In addition to the police (in the fight against social unrest or high crime rates), they often rely on the army, which suppresses regional rebellions or simply establishes military dictatorships when the civil authorities prove to be insufficiently stable. 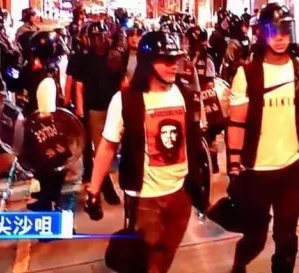 Before we address the capitalist semi-periphery (of which we ourselves are a part), let’s also mention the states of real-socialism, where state repression is mainly aimed at reactionary forces that advocate the restoration of capitalism, separatism, etc. The image of a Chinese policeman wearing a Che Guevara T-shirt (illustration) standing with his colleagues for the decolonization of Hong Kong and carrying out violence against pro-imperialist protesters is still remembered by many.

To address the attitude towards the police of semi-peripheral countries, one should note that those states could be progressive or reactionary, which primarily depends upon their attitude towards our principal contradiction – Imperialism. It does not take much wisdom to conclude that the police of Venezuela and Haiti do not play the same political role.

Finally, let’s also mention Serbia, which in post-socialism, due to its various specificities, has not yet been brought to a stable course, so it contains a lot of – some progressive, some reactionary – political expressions. In this case, when police violence is directed against communists, anarchists, labor strikes, forced evictions, etc. it is, of course, reactionary; yet when it is directed against fascists, the so-called “alt-right”, anti-vaxxers and pro-Western liberals it is quite tolerable.

Here we could also follow up on the current issue of mandatory military service. Unlike liberals (who are anti) and conservatives (who are pro), we will by no means isolate that question from the question of imperialism. Therefore, as long as Serbia is militarily (but also politically) neutral, and is not formally part of the imperialist alliances (EU/NATO) that carry out structural and military violence against oppressed nations, we consider mandatory military service positive and useful. If at some point it joined those alliances, our position would change. Accordingly, we believe that comrades in Croatia or Macedonia should oppose such tendencies, while in Serbia they should support them.