Westernization is not modernization!

If on social media, you have often had the opportunity of seeing photos comparing fashion trends in various Islamic countries dating from the period of secularization, with today’s period of Islamization. This is usually accompanied by a comment, as: “Such and such country in 1966 versus the same country in 2016”, below which you find a merry woman in a miniskirt, opposite a woman with a hijab, sad or angry, perhaps chanting slogans amidst some sort of anti-Western protests. The idea, of course, is to lure the liberal minded folks into supporting military actions against these “barbarians” till the skirts are done justice.

Isolated from anti-imperialist practice, or more importantly, the suffering that imperialism causes, left liberals do not possess the mechanism of class analysis to explain the social dynamics at the periphery, outside the framework of “liberal mind”. Thus, according to them, it is about reactionary forms of exploitation of women, by no means about resistance to cultural imperialism, about restraining emancipation, by no means about abandoning passivity. The Third world is waking up and, what hurts the liberal left the most, it recognizes that the so-called superiority of Western civilization and its values is based on constructed lies and myths; and that the contradictory nature of European self-understanding is completely cut off from their practice. And yet, it is obvious they never bother to ask themselves how many people in the world see five centuries of European hegemony as continuous ordeal.

Simply put – no one desires to be a cut-haired Indian in a suit and tie anymore, to whom racial and class divisions will be sold as progress, and land, resources and culture taken away at will. Or as the great Frantz Fanon said: “The colonized is elevated above his jungle status in proportion to his adoption of the mother country’s cultural standards. In the colonial context, the breakdown of the natives is complete only when they, clearly and loudly, recognize the superiority of Western values.”1

Under the influence of First-Worldist Marxism, for a long time there was a misconception among the Communists of the periphery that in the ideological sense only the Western right, and in the class sense only the Western bourgeoisie, promoted cultural racism; as if the Indians and other indigenous peoples were exterminated, displaced, stripped of their land and had their culture destroyed only by the bourgeoisie, and not by all classes of Western European settlers, and as if today the Western left does not lead the way in asserting cultural superiority as a means to “modernize” Islamic countries. Today, not only the communists but also many peoples of the world’s periphery get to see more and more clearly the origins of such ideas, but also the basis of cultural racism – that westernization is subsumed under modernization.

This subterfuge would remain largely misty had contemporary China and the DPRK not provided the indisputable proof that modernization and Westernization are not the same; that their combination inevitably leads to (neo)colonialism; that the transition from a traditional to a modern society not based on an endless accumulation of capital is possible; that it is equally effective while accepting the existence of different models of development, without the need to impose one’s own particularity as a supposedly universal value; that it can be carried out with the coexistence of man and nature, nurturing spiritual civilization, without huge class differences and destruction of the environment. It is, in fact, one of the basic engines of Western aggressiveness and hysteria when trying to discredit the Chinese model of development, since it is inconceivable to a person whose consciousness is deeply embedded with the idea of Western exceptionalism that he is actually not needed (nor desired) as a participant in that process.

A speech by the great Malcolm X comes to mind, where he says: “Until recently, all the power was concentrated in Europe. In London and Paris, Brussels and Washington, etc. Now the power bases are changing. As these power bases increase, in Europe they shrink. And that’s what causes trouble. The white man is worried. He knows he didn’t do right when all the power was in his hands, and if the power base changes, those who get it might know how to actually do the right.”2

Moreover, the westernization of traditional societies is directly in the service of integration into the global liberal economic structure and the global division of labor, and as such brings the peripheral peoples nothing but economic dependence, and only modernizes the West, providing it with an additional economic basis for the further development of its own technologies and economic dominance. Global polarization and the insurmountable gap between the First and Third World are the result of such a model of Westernization posing as “modernization”. It is harmful and “arrests”, even “paralyzes” the development of the productive forces of the colonized or economically dependent people.3

The photo below was taken in 1874 during the Government of Canada’s program of forcibly removing children from Native American parents, after which they would be placed in “residential schools” to, as they called it, “kill the Indian in them. “This program was implemented for more than a century and continued until the second half of the 20th century. It is estimated that at least 150,000 Metis and Inuit children went through this education system, which was compulsory for Native Americans and funded by the Department of Indian Affairs and Development of the North.

The aim of the program was to separate the children from the influence of their families, culture and language, and assimilate them through a very early European education. At least 6,000 children died after being forcibly separated from their parents, and many children were exposed to sexual abuse and forced sterilization during the early 20th century, due to the eugenics notion that members of inferior races should be prohibited from reproducing.

The context is the same, only the form is different. Today, the “liberal mind” is a tool for killing both the traditional “savages” in Serbians and among Islamic nations. True modernization lies elsewhere, and now we know where. 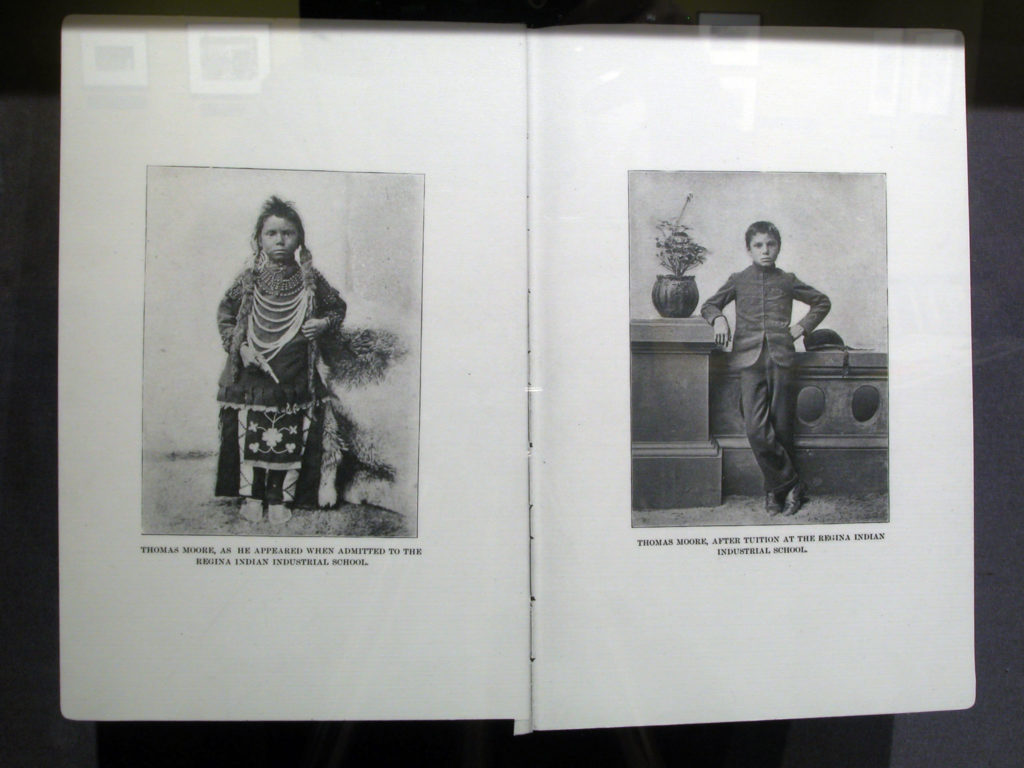