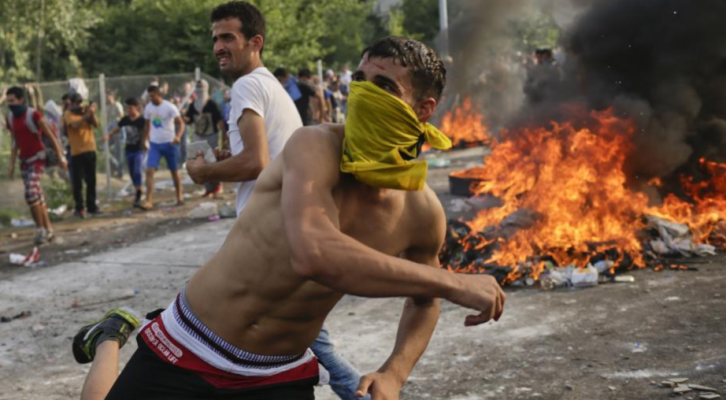 Corporate media reported a few weeks ago that Greek “leftists” and anarchists are behind the project of resettlement of African and Asian refugees in abandoned homes, which brings them to conflict with the owners of these buildings.1 We inquired about it amongst comrades in Greece, but none could confirm who the mentioned “leftists” are. What is certain is that anarchists have been involved in helping refugees with finding shelter and other necessities, for a while now. Also, in speaking to some immigrants from Molenbeek, the “infamous” Brussels neighborhood, we learned that, during violent racial and social unrest that shakes the peripheries of western European cities from time to time, it’s only the anarchists that offer (violent) actions of solidarity with minorities. Or, in their own words, “the only ones we sometimes let in”.

As this piece isn’t intended for broader masses but strictly Third worldist comrades, let’s not waste time on explaining the material conditions imperialism creates at home, such as social-chauvinism on the Left and lack of class interest amongst the western proletariat in abolishing capitalism-imperialism. In our previous piece “Creative Marxism and lumpen-proletariat”, besides the attitudes of great Marxist thinkers towards this class, we’ve shown what its possibilities and limitations are, in a variety of conditions. We’ve also recognized it as the only revolutionary subject in the West today, unable to overcome spontaneity without being organized by the forces of proletariat, and proposed linking it to objective revolutionary forces on the periphery.2

It may sound good in theory, but we were naive to think it might work in practice, considering the conditions of the revolutionary struggle on the periphery. Apart from a small number of revolutionary organizations that we might call the “objective forces”, anti-imperialist resistance in the periphery, although more and more widespread, has not reached the point of centralization and transnational coordination, which, in this global conflict, is of the utmost importance. Sure, the imperialists are being challenged today on more fronts then ever before. However, not by our own forces but mainly by radical islamists. To understand that, we need to ask ourselves what reasons lay behind the support they receive from the oppressed masses and why are they preferred over any type of leftist alternative currently on the table.

The reasons concern both doctrine and violence. The former touches on the influence of liberalism within our ranks – whose sprouts “must be removed from our heads”, which allows for the left to be viewed as an ally or tacit supporter of imperialism in the moslem world, unlike the islamists who not only do not require cultural transformation, but fiercely oppose it. The latter is of equal importance, and shows that under the conditions of occupation, you need not sell your doctrine as much as prove yourself efficient in fighting the enemy. We’ll address both issues in a higher stage of preparation for action.

In another article – “The dialectics of Trump”, we’ve shown how the antagonisms between the First and Second world powers tend to soften at the account of the Third world, which might further tighten our space for maneuver in deepening the contradictions between the imperialist powers and dearly restrict the diplomatic and armed actions of our peoples in the periphery. Yet, the cracks might open in the Center itself.3

Accordingly, it is the issue of refugees, that is of increasing importance for the development of the struggle against imperialism in countries of the imperialist Center.

Parallels with migrations during the period of primeval decolonization at the periphery are obvious. Landless laborers left the rural areas and moved towards the cities where they formed makeshift settlements – ghettos, that surround the city, from where they penetrated colonial cities and ports looking for work. The rebellion that later sprung up in rural areas infiltrated the cities through this layer of rural settlers, residents of the ghetto, lumpen-proletariat, which has not yet managed to find a way of gnawing the colonial bone. Gnawing the imperialist bone is equally made impossible to most of today’s African and Asian refugees in the West, which might be the key to penetrating the imperialist home soil and the possibility of future destabilization of the oppressing countries.

If “imperialism is the world system, the last stage of capitalism – and it must be defeated in a world confrontation; If a “the strategic end of this struggle should be the destruction of imperialism”, let’s see what our role is. Che saw our role as “the responsibility of the exploited and underdeveloped of the world to eliminate the foundations of imperialism: our oppressed nations, from where they extract capitals, raw materials, technicians and cheap labor, and to which they export new capitals — instruments of domination — arms and all kinds of articles; thus submerging us in an absolute dependence”, and proposed opening several international fronts – creating “many Vietnams”.

However, he hasn’t neglected the importance of “operating behind the enemy lines”, which, according to the dominant opinion on the revolutionary left of his epoch, was wrongly assigned to Western proletariat, without proper social and economic analysis of conditions that could open up such a possibility. In studying those, the comrades from Danish KAK (later M-KA) understood quite properly that, under conditions at the time, the lever was to be applied only to the periphery. The dynamics of capitalism requires continuous analysis of ever-changing conditions for vanguard to direct the class struggle accordingly. Thus, the inflow of three million Arab and African refugees to Europe in the last two years (still pouring in) in addition to those already present on imperialist soil, cannot be neglected.

Those newcomers, for the most part, cannot escape the process of lumpen-proletarianization and social marginalization due to a number of factors such as unskillfulness, language barriers and, of course, racism. On the other hand, the Western proletariat has recently shown that in times of crisis it leans to fascism, and so the radicalization of refugees, as well as the already present racial minorities, isn’t even in question.

Without operating behind the enemy lines, our anti-imperialist resistance at the periphery, even if victories were achievable here and there, is not sustainable in the long term, due to our military, technological and economic inferiority, and every kind of isolation. Deeper contradictions between First world and Second world powers, played at our hands to some extent (it didn’t help the Iraqis nor Libyans but has benefited Syrians), in, partly, breaking up the global imperialist hegemony, and offering the possibility of practical assistance at the local level. In seeking to prevent imperialist aggressions, or sliding towards autarky, we tend to recognize that alliance as lesser evil, which raises the issue of prevention of further development towards socialism. Namely, this aid does not come for free and without concessions, and so involves tolerating a significant private sector. Instead of pushing towards total delinking, anti-imperialist governments and movements are forced upon a modified relinking.

In this sense only, it is in these anarchist organizations (Anarcho-syndicalists) in the West, that we’re gaining new allies. As with the aforementioned Danish group, the proletariat makes a negligible part of the membership of anarchist organizations in the West. These revolutionaries mainly arise from the ranks of the of the petty bourgeoisie – class traitors, primarily motivated by ideological, not material motives. The petty bourgeoisie in our ranks at the periphery (in post-colonial times) poses a risk of opportunism, precisely due to conflict of interest, while at the core countries it seems not to be the case. Conflicts of interest are equally represented among all classes in the core (except among those that we marked as revolutionary potential), but unlike the proletariat, which reacts and is led exclusively by interests, members of the petty bourgeoisie, as we see in practice, in small numbers and under certain circumstances, could work against their own class, driven by ideological motives.

Are we suggesting that anarchists organize African and Asian refugees in the West? Yes and no. Yes – because Marxism is dealing with objective antagonisms, based on what things are like, not what we’d like them to be, and these groups are the only ones pulling their weight in this matter of dear importance. No – because such a scenario is neither completely desirable nor possible. It is not desirable for well-known idealogical reasons – a necessity of Marxist training of the revolutionary subject, reactionary idealism and anti-materialism shown by most anarchists, favoring anti-authoritarianism over anti-imperialism, the risk of spontaneous and uncontrolled terrorism. It is not possible for political reasons – liberal anti-theism, lack of understanding of the necessity of particularity and it’s role in decolonization, as well as historical stages of human development, the passive attitude towards the anti-colonial and national liberation struggles, etc.

As we know, we’re still talking about the First world ideology based, ultimately, on the idea of ​​superiority of the cultural heritage of the West, but incoherently, without the open support for (neo)colonial policy (unlike Trots). However, they seem to be the only ones who sniffed the revolutionary subject in Western Europe. Opposed to racism and motivated by humanism, they had played a progressive role in relation to refugees, providing concrete assistance, launching solidarity campaigns, and in few cases (France & Greece), inspired the frightened people to oppose police terror, and encouraged radicalization. Just as violent anti-imperialist uprisings at the periphery were “hijacked” by islamists, so is the “operation behind enemy lines” in the core, at least in it’s embryo, by anarchists.

Here, we have presented the opinion that in the imperialist center, under the conditions of imperialist super-profits, class character barely determines political attitude of an individual, therefore progressivism and radicalism are a thing of idiosyncrasy. We brought to light the importance of “operating behind enemy lines” and its achievability under the conditions of mass migrations. Finally we propose concrete measures of action towards building the International of Third worldist-Marxist organizations, centralizing the transnational anti-imperialist front and coordinating the revolutionary struggle in the periphery and the core, with a clear mission of creating many Vietnams and operating behind enemy lines.